Vanuatu passport. The Vanuatu passport is an international travel document that is issued to Vanuatu citizens. As of 1 January 2017, Vanuatuan citizens had visa-free or visa on arrival access to 124 countries and territories, ranking the Vanuatuan passport 45th in terms of travel freedom according to the Henley visa restrictions index. Vanuatu signed a mutual visa waiver agreement with Schengen Area countries on 28 May 2015. A mutual visa waiver agreement was signed with Russia on 20 September 2016 and entered into force on 21 October 2016.

In addition to all 26 Schengen Area countries, Vanuatuans may now visit the non-Schengen Member states of the Cyprus, Romania and Bulgaria, as well as continued access to the United Kingdom and Ireland which has existed for a long time thanks to the islands’ former ties to Britain. With Vanuatu’s passport now packing more punch as a travel document, obtaining residency in the country with the goal of becoming a naturalized citizen in the future seems more appealing. 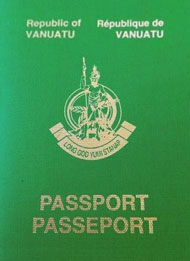 Are you looking for information in which countries you can visa travel with the Vanuatu Passport?

The initial passport issued, when expired, can be renewed through any Vanuatu Embassy or Consulate for the standard passport renewal fee.

The Application should be submitted with:

Currently the appropriate fee (VATU) for the service required is: